The Church of St George the Martyr, the leading Anglo-Catholic church in Australia, stands on a busy arterial road in the closely settled inner suburb of Goodwood. A visitor to the area in the early 1870’s would have been greeted by an entirely different scene – open country with crops and livestock farmed by a few scattered families. However it was not long before the village of Goodwood was becoming well-established and serving a growing population. The time had come to plan the construction of a place of worship for Anglican residents.

Early in September 1880 a meeting was held at the home of Mr W. Bishop (where the Capri Cinema now stands) to discuss the building of an Anglican Church. No time was lost, and the foundation stone of the new church was laid on October 8, 1881 on land on the corner of Goodwood Road and Victoria Street given by a Mr Mills. The church opened for worship on January 12, 1882. 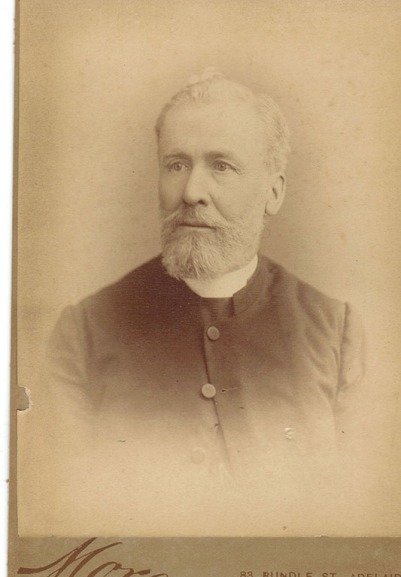 The Rev’d William Moore and a picture of his wife Elizabeth with some students at her day school.

The fledgling Anglican community was briefly under the oversight of St Luke’s, Whitmore Square until, in March 1884, the retired headmaster of Pulteney Grammar School, the Reverend William Samuel Moore, was appointed as the first incumbent of Goodwood. In April 1884 his incumbency was extended to include the parishes of St Mary’s, South Road and Christ Church, O’Halloran Hill.

The church at Goodwood was dedicated to St George the Martyr, the patron saint of England. Little is known about St George. It is likely he was martyred for his faith in Palestine early in the 4th century. St George is probably best known as the legendary hero who battled and defeated a dragon. This has come to symbolise the victory of goodness over evil.

The Parish of Goodwood flourished. There was soon a large Sunday School of over 100 children and in 1893 the church was extended to accommodate an expanding congregation. In 1898 a day-school had 60 children on its roll. (The day-school closed in 1906 and was re-opened in 1917. It finally ceased in 1944). It soon became evident, however, that the church building was inadequate for the increasing number of worshippers.

An appeal for money resulted in a most generous gift from Mrs Priscilla Simms (later Mrs Priscilla Bickford) that allowed the building of a new church to go ahead. The foundation stone was laid on October 27 1902 by the Archbishop and Primate of Australia, Dr W. Saumarez-Smith. The architect of the Church was Thomas Henry Lyon, Fr Wise’s brother-in-law, and the construction was undertaken by the well-known Adelaide builder, Walter Charles Torode. The completed building was consecrated by the Bishop of Adelaide, Bishop Harmer, on September 1, 1903 and was open for worship on that day. About 40 clergy and 800 lay people attended the consecration. Parishioners had been urged not to communicate at the consecration but to attend the 7 am celebration in the old church. The altar was then carried across Goodwood Road to the Lady Chapel of the new building.

The driving force behind the construction of the new church, the style of its furnishings and the form of worship that took place within its walls was Father Percy William Charlton Wise. A graduate of Cambridge University, he came with his wife, Caroline, to Australia in 1895. His first appointment was as curate at Christ Church, North Adelaide before becoming incumbent of the Parish of Crafers in 1897. In 1900 he was appointed parish priest of Goodwood, a post he held for the next forty years.

Father Wise not only had responsibility for Goodwood but also for the churches at Plympton (in the early years) and Keswick. The Mission Church of the Ascension at Keswick was at first attached to St James’, Mile End. Re-named St Alban’s by Father Wise, it was under the care of Goodwood from 1900 until 1951 when it passed to Glandore. In 1903 Father Wise also undertook the care of Unley Parish during their rector’s nine month absence on holiday. He also had special preaching duties at the Cathedral where he was appointed a Canon in 1903. But the heart of his ministry was at St George’s.

Father Wise was to bring to St George’s new ways of understanding church life and worship. In this he was influenced by the Oxford Movement. Initiated by a group of clergyman in England in the mid-19th century, this Movement sought to recall the Church of England (the Anglican Church) to its true nature of former times as an institution divinely inspired by God, and Catholic in the true sense of being universal. Churches which embraced the beliefs of the Oxford Movement came to be known as Anglo-Catholic.

An early picture, circa 1910 of a school picnic. Fr Wise is in the centre.

Central to these beliefs is a strong sense of the Incarnation, that our Lord Jesus Christ shared our common life and endows with great significance the things of the earth. Coupled with this understanding is an embracing and cherishing of God’s goodness in creation and in the gifts with which God endows us. The things of the earth rightly used make for the expression of genuine spirituality.

Another crucial outcome of the Oxford Movement was the restoration of the Mass to the centre of worship, together with an emphasis on the real presence of Christ in the Blessed Sacrament, the Bread and Wine of Holy Communion. God is with us in God’s Church, and therefore the adornment of the church, together with the liturgy and worship, should be as beautiful as possible – nothing is too good for God!

The services at St George’s are therefore marked by disciplined ceremonial tradition with much colour, movement, and ritual, to the sound of bells and fine music, the fragrance of incense and the touch of the holy water. All of our senses are involved in worship, thus giving importance and value to the outward and visible expressions of what is within the heart. That this approach values tangible symbols is made apparent in the use of holy water and incense, the sounding of the sanctuary bells, and the wearing of fine vestments by the priest and clergy during the Mass. All of these add dignity and solemnity to the liturgy, worship and service. In statues, pictures and stained glass many saints are represented and the communion of living and departed in the Lord is commemorated. Many ancient Catholic traditions continue to be kept at St George’s, Goodwood. Benediction follows Evensong. A lighted lamp by the tabernacle behind the high altar indicates that the Blessed Sacrament is continually reserved there and those approaching the altar show their respect by genuflecting. We are here to worship God. By doing that we allow God to take charge and change us.

St George’s therefore maintains a long tradition of Christian worship in the Anglo-Catholic style and acknowledges the contribution and heritage of the Church Catholic in Anglican church life.

St George’s does not see itself as a museum piece, fossilized in the past. We are part of the pilgrim people of God, and while honouring those things of value that have been handed down to us over the generations, we engage with the present and look forward to the future.

Sunday masses at 8 am & 10 am. Masses daily except Monday.